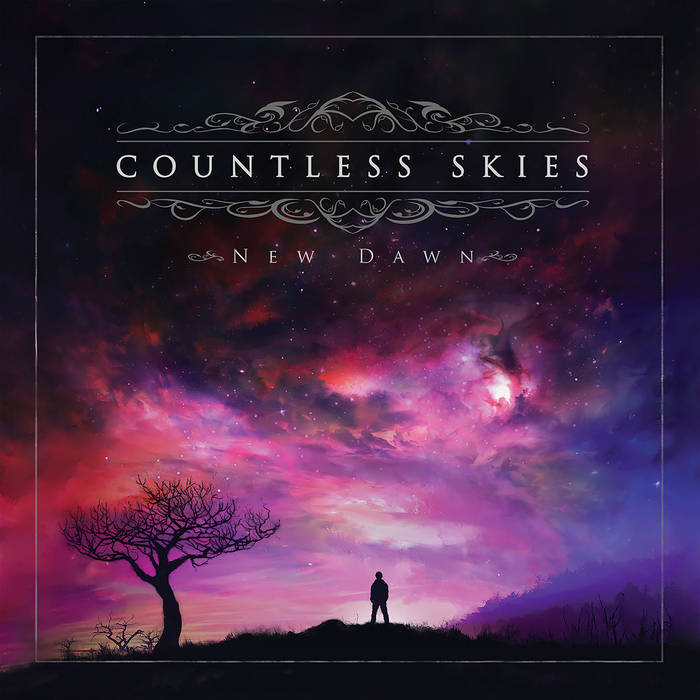 Monia Lisa My intuition about Countless Skies was right. And the potential I perceived on their EP was only a tiny glimpse compared with what they show in this album. It is absolutely epic! Favorite track: Incendium.

mvick71 I came across this before Bloodstock 2019, it very quickly became my most played abum of 2019. Everything about it hits my musical feels from the rhythms, James' guitar tone and Phils soaring vocals. There is nothing here not to love. Favorite track: Ethereal.

Named after Be'lakor's song 'Countless Skies', the band burst onto the modern metal scene with their debut self-titled EP in late 2014. Blending progressive and darkly intense music influenced by their Scandinavian melodeath heroes, the EP began a flood of shows up and down the UK. After winning the Bedfordshire 'Metal to the Masses' competition, COUNTLESS SKIES played a triumphant gig on the 'New Blood' stage at the UK’s No1 independent metal festival, Bloodstock Open Air in Summer 2015. With such a tremendous start, the future looks bright for COUNTLESS SKIES!

"If you like high-octane melodic Death Metal and bands like Be’lakor, Insomnium, etc., this is one release you cannot miss out on." - Infernalmasquerade.com

"The latest effort (and debut full length) from the English group, titled New Dawn, is an uplifting barrage of melodic death metal that forces an audience to reach a new level of existence. From the imagery to the music, it both inspires and creates a peaceful energy that is extremely difficult to turn away from." - Ninecircles.co

"To say that New Dawn is anything less than a masterpiece would be shortchanging an absolutely astonishing and breathtaking work of art" - Grimpacificnorth.com

'New Dawn' was recorded by Danny Biggin at HVR Studios before seeing its mix and master under the scrutiny of Juho Räihä at SoundSpiral Audio. The artwork was crafted once again by the talented Carl Ellis.

A world familiar in stranger light
A rift in sterile order and chaos of the night
There are no heroes, there are no wise men

We live alone, beware the heinous
Afeard, tyrannised
Speak not in chorus
But tonight we lead the race

The sky will fall for all
The rain came crashing down on us
No pain, no fear. Behold the martyr
And between heroes we die alone

We live in rage, believe the fearless
A veil of false command
Propelled by memory
We join to fill the night

Some will fall, some will die
So more the calling to fight
We feed the fire, we light the flame
And between heroes we die as one
Track Name: Incendium
To breath in flames
To feed the only fire that I cannot explain
In time, enrage
Defeat the mountain that has held me back today

Between the light and glowing embers
Burns the heart of creation
A flaming elegance
In which I know myself
Track Name: Solace
Still is the day that marries the shade
As eternal night descends

Beneath a starlit sky, a faint and doleful sigh
No wind to carry it beyond this empty realm
The light was all but gone when sang this mournful song
But not a soul in sight could hear this verse of overwhelming grief

As the fallen leaves
Return to paint the path
Her final resting place
Will shimmer with the stars
Track Name: Daybreak
Racing the sun
Forever just beyond your grasp
Outrun the dark
Consuming all within its path

Hold on
The night is always darkest before
The break of dawn
Track Name: Ethereal
Waves crash against the strand
Her faint voice calls
From beneath the depths below
Far in to the distance
Lights beam out across
The vast abyss

Lost
I fear that I will never find the strength again
I feel that I have suffered far too long, I’ve given all I can

I was told that there was something more
But now I'm filled with doubt, drifting from the shore

Spiralling, dragging deeper down
Into the undertow
Crushed by its cold embrace
In numbing silence, I drift away

I strain to stay awake
As consciousness
Fades I know my time has come
Track Name: Wanderer
The bonds of loss and suffering
A burden for the weaker mind

Come walk with me on the greater road
Through golden paths, to nowhere
Leave all of yourself and the world behind
I am the wanderer, and I live forever

Days flow free
And pass the shore
No words for me

Bandcamp Daily  your guide to the world of Bandcamp

Tasty gems from around the world, plus interviews with Kaitlyn Aurelia Smith and Nick Hakim.